The so called "Paliokastelli" region used to be the summer getaway for the people from the village in the older years. It lies approximately 5 kilometers away from "Kastellia" (after the exit of the village past the community office) and you can reach it by car climbing the Gkiona mountain through an amazing scenic drive of pine trees, clear spring water and pure nature. It is perfect for a day trip to have a picnic and enjoy nature.

Further climbing Gkiona and after approximately 2 kilometers from "Paliokastelli", we propose you stop at "Hani of Zagganas", a hut in the forrest which offers delicious food and a perfect rest stop. The person who runs the hut is Mr. Giorgos Halatsas.

If you do not want to drive for a day and "Paliokastelli" or the "Hani of Zagganas" seem far away for a walk, you can stop before you start to climb Gkiona (approximately 3 kilometers from the village) at the "Loggies region". The route is very scenic since it is through a beautiful canyon.

You will know that you have reached that region since you will notice a huge maple tree in the middle of the street making the street look like it is hugging it.

This tree will greet you while entering Kastellia from the entrance as you are coming from Brallos.

It's name is attributed to the owner of the land on which the tree stands and has been a unique meeting point for the elder towards Livadari, Paliokastero and Pazarorachi.

In our villages the "tree" were part of a variety of customs for every day life. For instance berry trees were a major part of the tobacco process under which the tobacco leaves used to be stacked and ready for shipment, therefore every family which was into tobacco had a berry tree outside their house. Their brnch skin was also used for tying up the stacks of tobacco leaves for drying up in the sun. Berry trees also existed in Paliokastelli where, according to the elder, our ancestors were into silk cultivation. In wineyard you got a lotoffig trees with beautiful white figs. In mills there were a lot of maple trees feeding on the water from the mill whereas in the cemetary there were (and still are) very tall cypress trees.

For a beautiful, short walk you can move towards the village borders (towards "Bralos") and stop at Aghios Nicolaos church. If you have children this will be a perfect stop to combine your walk with your children playing at a play ground just across the street.

2 kilometers outside "Kastellia" (towards "Gravia") lies the historical and famous "Hani of Gravia" of Oddiseas Androutsos. During the last years there has been a remarkable effort to rebuild the Hani (hut) simulating the area just like it was during 1821 (year when Greece won its independance from the Ottoman Empire).

The Parnassos and Gkiona mountain areas are very rich in minerals, especially bauxite. This is a positive element for the region since it provides economical wealth. Its negative side though is that a lot of parts of the mountains have been exploited and their outter appearence has been affected (mainly during the past years because now environmental sensitivity has increased). Still, a very interesting park you can find in the area is the "Fokida Mining Park", also knows as "Vagonetto" which is a new and unique theme park, offering each guest the opportunity to experience firsthand techniques of bauxite mining as well as observe a lot of exhibits. The park lies outside of "Kastellia" in the direction towards "Amfissa", past "Gravia". Just follow the signs...

For more information on the park, you can visit its web site at http://www.vagonetto.gr.

Leaving "Kastellia" and moving towards "Lamia", in about 16 kilometers you will find a sign for the well known "Damasta monastery". After a short climb (by car) on the mountain, you will suddenly see the monastery in a forrest of pine trees.

From the monastery you can also enjoy a fabulous view from the top of the entire "Lamia plain" which looks like a carpet from up there.

The mountain of Parnassos is a very well known moutnain in Greece, mainly due to its ski resort, as well as the traditional village of "Arachova" which provide winter getaway destinations for a lot of Greeks. If you love winter sports (skiing, snowboarding, etc.), then we recommend you visit the Parnassos ski resort. We are also offering you the ability to study the ski trail map of the resort.

Besides the winter and the ski resort (which lies 20 kilometers away from "Kastellia") though, Paranassos is also beautiful during the summer. We propose you stop at "Arachova" to have a cup of coffee under the shade of trees and continue your journey.

After "Arachova" we propose you drive towards the magical region of "Delphi" from ancient times. You will be speechless in front of the immense beauty, silence and "magic" of that place which was thought to be the "center of the earth".

After Delphi and climbing down the mountain (you can also start from "Kastellia" towards "Gravia", then "Amfissa" and then "Itea") we propose you visit the jewel village called "Galaxidi" and just walk around its narrow streets, take a swim on its beaches and enjoy delicious food.

Every year, in the beginning of summer, the world famous WRC "Rally of Greece" (formerly known as "Rally Acropolis") takes place in Greece. "Kastellia" lies in the heart of the region where most special stages take place at. Moreover, in the old years, there used to exist a special stage that went through "Paliokastelli" and "Hani of Zagganas", when the street used to be dirt and not asphalt. Also, "Loggies" recently was used as a pit stop for the Rally cars. We would like to cordially thank Mr. Kostas Stoforos for the picture of Laspa's Tree as well as Mr.Dimitris Vellios, Ms. Efi Kyriazi, Ms. Zeta Kyriazi and Ms. Efi Kontolati for their stories of that tree which have been included in the relevant paragraph of the current page of kastellia.gr 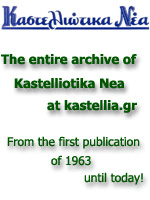